Tracing the footsteps of El Caudillo

In February 1519, Hernán Cortés set sail from Cuba to Mexico with 11 ships and 550 men. Four months later, Cortés founded Villa Rica de la Veracruz, the first city on the American continent. The conquistadores set course for the Aztec capital Tenochtitlan, where they were received by Montezuma II. They would capture and kill the Aztec emperors, destroy the Aztec civilization and claim the empire for Spain.

Werner Hermans is tracing the footsteps of El Caudillo, from his birthplace Medellín, Extremadura, to the Hospital de Jesús Nazareno in Mexico City. His exploration is based on Hugh Thomas's monumental work Conquest; Montezuma, Cortés and the fall of Old Mexico (1994). The route to Tenochtitlan crossed mountain passes, volcanoes and salty deserts. Nowadays one also finds himself in the midst of the Veracruz seaport, abandoned ruins, near nuclear plants and in the suburban sprawl of the Distrito Federal. Although Hugh Thomas gives a detailed account of the route, tangible memories are hard to find. Being a controversial person in Mexican history, representations and monuments of Cortés are few. 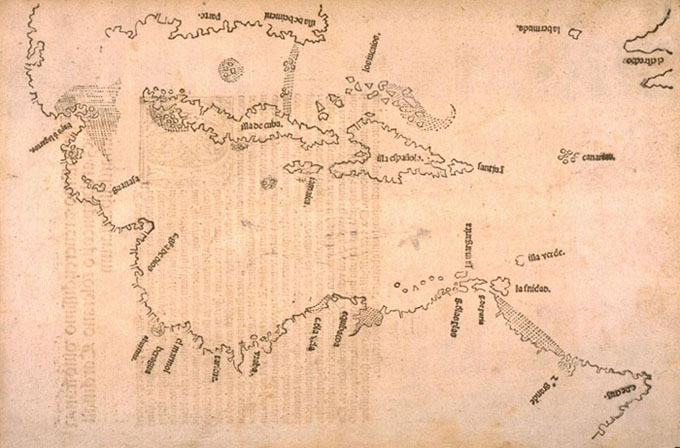 The West Indies as they were known when Cortés arrived. This map was published in Sevilla by Pietro Martire d'Anghiera (Peter Martyr) in the 1511 edition of his 'Decades'.
His publications included the first historical account of the Spanish discoveries. In his work he suggested that Columbus had in fact reached a 'New World' rather than 'the Indies'. 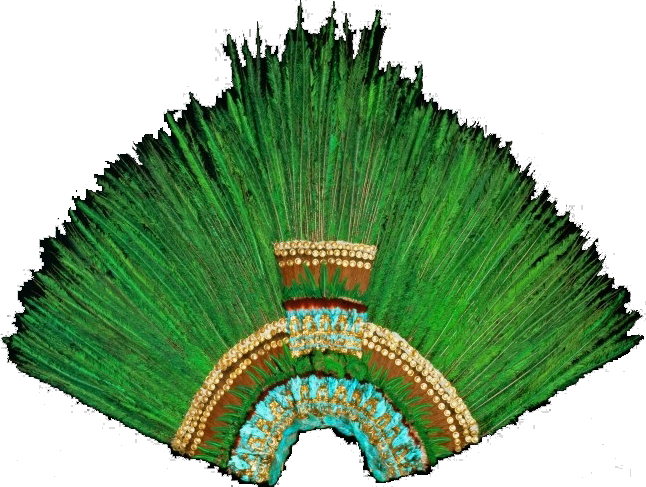 This Aztec headdress is on display in the Museum of Ethnology in Vienna. It consists of over 450 tail feathers of the resplendent quetzal, as well as of other tropical birds. In its original state, a golden bird's beak was attached to the headdress, but this gold was probably melted down into bars. Legends tell this featherwork once belonged to Montezuma II. Cortés sent Montezuma's 'present' to his sovereign Charles I of Spain, who passed it on to relatives in Austria, around 1524. This link with Montezuma II cannot be proven. The featherwork has long been a source of dispute between Austria and Mexico, as no similar pieces remain in Mexico. 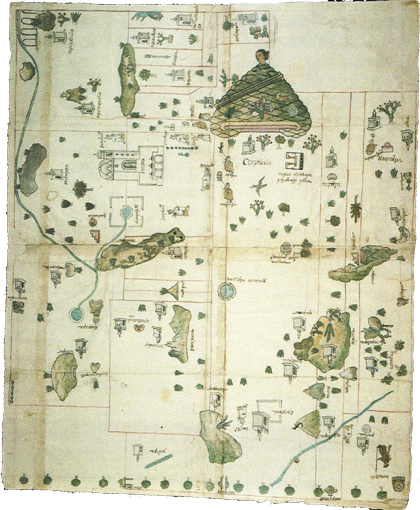 The 'Relación Geográfica' map of Cempoala, 1580. Cempoala was Cortés's first ally against the Aztecs. Cempoala nowadays is a relatively unknown but well maintained archeological site where many ruins related to the early years of conquest can be seen. This map is the result of a survey of Spanish officials in Mexico, commissioned by king Philip II, asking for local maps and descriptions of places. Many maps, like this one, were painted by indigenous artists. A large glyph depicts the indigenous place name of Cempoala; to the left is the local Franciscan monastery. The landscape is thickly sown with indigenous toponyms and images of native leaders. (source: B.E. Mundy, The mapping of New Spain; Indigenous cartography and the maps of the Relaciónes Geográficas, 1996)